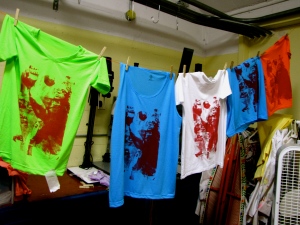 There is glitter everywhere. On the walls, covering the tables and stuck on members of Team Possible.

Team Possible is a group of young adults with Down syndrome who get together every Saturday at the Chocolate Lake community centre to create art projects.

Today, Team Possible is working on art projects for their Christmas show. They are decorating Christmas trees, painting a mural and creating glue sculptures. All projects involve massive amounts of multicoloured glitter.

Max Owen loves being a part of Team Possible. He says it’s nice to socialize with other people who do art and who have Down syndrome too. He thinks the art they create is really cool.

“What else would I do on a Saturday? If it weren’t for Team Possible it would be boring,” he says. “It makes me feel really accomplished, thinking of the things other people can’t do.”

On this particular Saturday, Owen worked on a wide range of projects.

“I helped out with some of the staff, which was really fun. We used glue and glitter and yarn and stuff like that,” he says. “It looks really neat when it’s done.”

Owen is just one of the roughly 15 young adults that make up Team Possible.

Renee Forrestall, a NSCAD professor, founded the program in 2007 after she realized there was a lack of resources and programs for young adults with Down syndrome after high school. Her daughter, Marie, has Down syndrome. She says she wanted to focus the program around art because art is accessible to everyone.

“It’s not verbal,” she says. “If you work intuitively it can be very successful. The less thought, the better it can be.”

The program is funded through grants, small donations and through selling the artwork they make.

To help run the program she brings together a group of volunteers and staff, many of which go to NSCAD. Forrestall says bringing the two groups together results in a creative jam session.

Dylan Fish is one of those NSCAD students. Fish is wearing a neon yellow T-shirt that was decorated with a silk screen design that Team Possible made. He proudly shows off the parts that he and his partner created for the project. As he adds glitter to the tree he and Eduardo worked on, he explains the program is empowering for everyone involved.

“I really like the environment. I really like how easy going it is and how collaborative it is,” Fish says. “We can really work together to make their vision.”

Fish has been involved since 2010 and now works for the group.

“I think it really gives young adults a lot of confidence and shows the community how capable and amazing they really are,” he says. “Just from walking around you really get a sense of all their personalities and they have such a great sense of humour and it really comes out in their work.”

Before Team Possible, Fish didn’t know much about Down syndrome.

“I didn’t know what to expect and I’ve been so blown away by what we do as a group and as a community,” he says. “It’s really special because once you become friends with them you’re their family you’re their friends for life.”

He laughs as he says everyone has each other on Facebook.

NSCAD student Caitlyn Hamilton is a new volunteer. She has only been to three meetings but has already noticed the impact the program has. She enjoys the flexibility of the program, saying participants can do whatever they want.

“I just love how free it is,” she says. “It’s really including everyone in what they love to do and making that available to them.”

NSCAD student Clara Congdon agrees. She has been working with the group for two years and has seen the participants grow through the program.

“I’ve seen their individual creativity come out throughout the time I’ve worked with them,” she says.

Fish says he’s learned a lot from the team.

Fish was really struck by one participant at a past Saturday fall in, the time at the beginning of the meeting where participants talk about their weeks and check in with each other. The participant was sharing her thoughts on her grandmother’s death when another girl laughed.

“The girl talking acknowledged it, she was like, oh you know I’m really sad and it’s not ok that you’re laughing but it’s alright. I forgive you and just kept talking as if nothing had happened and totally walked on from that,” says Fish. “I think that’s the most amazing thing about Down syndrome is just the lovingness and the ability to be the bigger person. Nothing gets them down, it’s really inspiring and really encouraging.”

Forrestall describes people with Down syndrome as visible minorities.

By getting involved in the community through Team Possible, Forrestall believes they are changing opinions about Down syndrome.

“It’s about sharing a culture,” she says. “They are not all the same, they are all unique but they share some pretty special attributes that make them pretty special.”

She believes the work with Team Possible raises awareness in the community.

This area is under construction - check back regularly for updates.

In the meantime, check out the different things I can offer you.